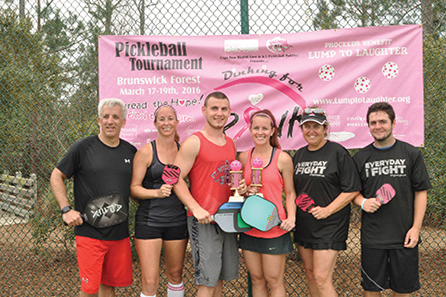 Players and enthusiasts from all over the Southeastern hemisphere and Canada trekked to the Cape Fear National Golf Course to play in the Dink for Pink Pickleball Tournament in Brunswick Forest! Attaining great success, the tournament that took place from March 15th through the 19th raised an impeccable $13,000 for the Lump to Laughter organization. 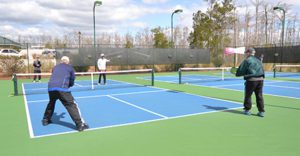 Founded by two friends, Renee Ballard and Connie Hill, Lump to Laughter–an organization based right here in Wilmington–helps provide financial and emotional support to women who are newly diagnosed with breast cancer. There are various ways to get involved with the organization, including their many programs and events similar to the Dink for Pink Pickleball Tournament.

If you’re looking to get involved with pickleball, then look no further than Brunswick Forest! Play your way with drop-in classes, training clinics, tournaments and more! With ten courts at Brunswick Forest—six at Cape Fear National and four at the Fitness & Wellness Center—playing anytime is easy! Meet fellow residents and fans of the sport in the Brunswick Forest Pickleball Club where you can attend community and group events, contests, and everything in between right here in Coastal North Carolina!